Ghost is a metal band from Sweden. Their genre is hard to classify, some refer to them as doom metal, others say it's just heavy metal, but if you listen to them closely, they have a wide range of genres within them that go from psychedelic rock/metal to doom to anything else.
Something very characteristic of their music is that they do a lot of covers of songs they like. If you have ghosts by Roky Erickson is one of their most known covers and the one that gives name to this fanlisting.
But if we are honest, the first thing to draw attention about the band is their frontman. Papa Emeritus is an outgoing creature with an amazing voice and stage presence. His looks being that of an undead, a skelleton, often dressed as a pope but also having other looks as shown below.

There's not just one Papa Emeritus, we have had a Papa Emeritus III until now and are waiting for the next to come! ;D
Update: After Papa Emeritus III, Cardinal Copia appeared! Tobias Forge told fans that he would turn into a Papa Emeritus over time, but didn't say when or how.
Another characteristic of the band is that the musicians, besides Papa Emeritus, are called Nameless Ghouls. They are always amazing musicians that cover themselves and their identity behind their masks and outfit, which gives the band a powerful image.

However, the band works with hired musicians, so they tend to change from time to time and there's not a defined line up. That being said, every Nameless Ghoul contributes to the band's pressence in a unique way, which can be seen in life performances.
Speaking of which, Papa and the Ghouls tend to hang out with fans after concerts, sign autographs and take pictures. Which is very nice from them!

According to TFL.org: "A fanlisting is simply an online list of fans of a subject, such as a TV show, actor, or musician, that is created by an individual and open for fans from around the world to join. There are no costs, and the only requirements to join a fanlisting are your name and country. Fanlistings do not have to be large sites (although some are), they are just a place where you can sign up with other fans."

Ghost has become my favourite band. It's crazy, once my boyfriend told me "I discovered a band you are going to love!" and OH MAN WAS HE RIGHT. I loved their music on the spot. Funny thing is I didn't even know their looks when I first listened to them and was shocked about their image. Little by little, I got more interested in that crazy creature we call Papa Emeritus xD And all the mystery surrounding the band really got me into them more.
So yeah! That's why I'm building them this humble fanlisting ♥

This fanlisting is run with Enthusiast and is maintained by Janna.
You are currently viewing version 2 of If you have ghosts. The header remains the same because I like it a lot, but the design is a lot more cleaner and reading friendly! The name of the fanlisting comes from their cover of Roky Erickson :D Go check it out if you still haven't! You can see past versions of this site below. Please do not copy, reproduce or use any of its parts in any way, thanks! 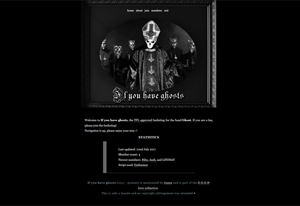